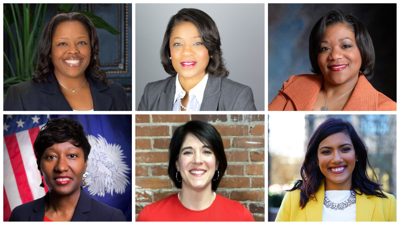 COLUMBIA — The faces that filled the squares in a recent virtual forum for Columbia’s upcoming City Council election told the story of a political movement.

The six women who have announced plans to run for city office were part of a S.C. Democratic Women’s Council June 28 event called “Get to Know Her” meant to highlight the importance of women in politics.

The number of candidates ahead of the Nov. 2 election represents the most women who longtime Columbia observers recall seeking city office during the same election.

South Carolina’s second-largest city has had a handful of women throughout the years on its City Council, including one now.

The field for the 2021 election and the number of seats at stake presents a chance for the council to pick up its most female representation, with as many as three women seated in council chambers starting in 2022. That’s in addition to City Manager Teresa Wilson, who oversees the day-to-day operations and serves as the council’s CEO.

Tameika Isaac Devine is leaving her council seat open to run for mayor — she’d be the first woman to hold the office. Heather Bauer, Aditi Bussells and Deitra Matthews are seeking Devine’s at-large seat. Tina Herbert and Christa Williams are facing off to represent North Columbia in District 1. Of these, only Devine has held elected office.

“I think the benefit to the citizens of Columbia, with the number of women who are offering themselves for office and the potential to have more women on council, is that l think you will see the leadership of the city be different,” Devine said. “I think you’ll see our approach to issues be different. I think you’ll see folks who are willing to roll up their sleeves and get things done.”

By comparison, five men are currently running for city offices, including Councilman Daniel Rickenmann and former mayoral aide Sam Johnson for mayor after Steve Benjamin decided to not seek reelection. Elsewhere, Tyler Bailey and John Tyler are seeking the at-large seat, and Joe Taylor is unopposed for Rickenmann’s District 4 seat.

The rising participation among women continues a trend started with grassroots efforts to encourage more female candidates in the wake of the 2016 presidential election when Hillary Clinton was the Democratic nominee.

That effort starts with local boards and commissions and local elections like Columbia City Council, said Barbara Rackes, one of the founders of S.C. Women in Leadership, which encourages women to participate in government and leadership roles.

Women make up 32 percent of the elected officials on city and town councils throughout the state, according to the Municipal Association of South Carolina. They account for 52 percent of the state population.

“It’s just like school, you have to learn to read before you can write a dissertation,” Rackes said. “We believe in starting at the ground level and working your way up. It’s the best way to gain experience.”

The organization tries to impress on candidates that even if they lose their first race, the issues they raise during the campaign could have a lasting effect and the experience primes them for another run, Rackes said.

That as many women as men are running for local office shouldn’t be out of the ordinary, said Bauer, a South Kilbourne resident who unsuccessfully ran against Rhodes Bailey in the 2020 Democratic primary for S.C. House District 75.

She noted that campaign events she has participated in have all somehow related to the fact she’s a woman, that she hopes this doesn’t have to be a conversation in the near future and she’s ready to just talk about her experience and ideas for the city.

Bauer is a 2019 graduate of Emerge South Carolina, an affiliate of a nationwide program that trains Democratic women to run for office.

Devine completed the program’s boot camp in 2020 after 18 years in office, and Bussells is currently enrolled. Richland County Council members Allison Terracio and Gretchen Barron are also products of Emerge.

“I’m excited as a female candidate to see other women running,” Bauer said. “I was asked, ‘Maybe you shouldn’t run, because there’s another woman running.’ I said no, this should be a normal thing. You should have smart, strong women; that’s a good thing. We’re seeing progress for sure.”

More women on the ballot could help drive turnout during an off year with no statewide or congressional seats up for grabs, said Lauren Harper, a political strategist who is on the board of S.C. Women in Leadership and working for Matthews’ city council campaign. Harper worked in Benjamin’s office from 2016 to 2019, a period when Devine was the only woman on the council.

“Women have been natural leaders in different spaces, they just don’t always identify as leaders because they don’t have titles,” Harper said. “And so when they are given opportunities to run, I think women are starting to take those opportunities and lend their voices and their experiences to the discourse for the city.”